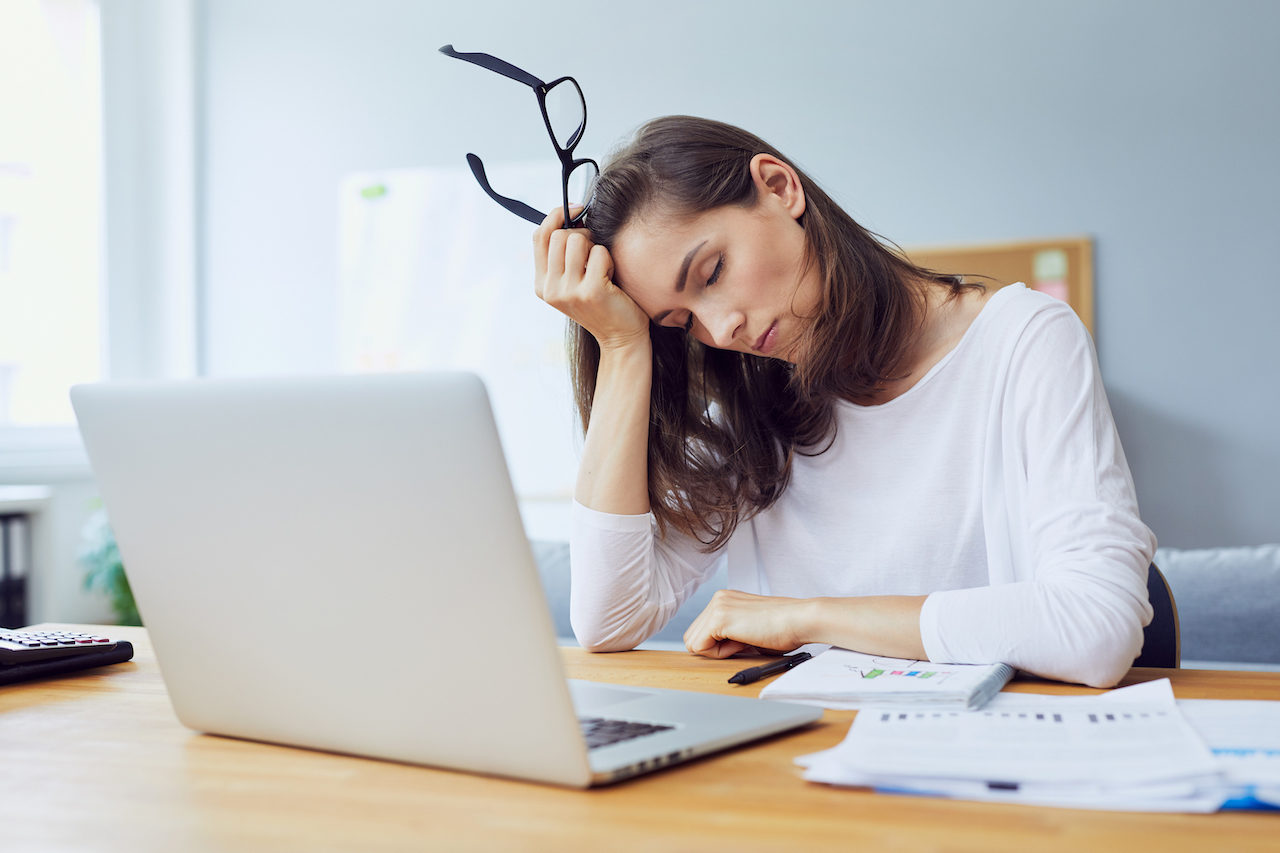 Hypothyroidism is a hormone imbalance that may come along with a group of symptoms that can affect your cognition, mood, and energy. Read on to learn more about the best foods, supplements, and lifestyle strategies to beat hypothyroidism-linked “brain fog.”

How Hypothyroidism Affects the Brain

The thyroid is a gland located at the base of the neck, below the Adam’s apple. It produces the thyroid hormones thyroxine (T4) and triiodothyronine (T3), which control the growth, development, and metabolism of nearly every cell in the body [1].

The hypothalamus produces thyrotropin-releasing hormone (TRH), which activates the pituitary to produce and release thyroid-stimulating hormone (TSH). TSH, in turn, stimulates T3 and T4 production in the thyroid gland [1, 2].

The thyroid gland produces T4 from iodine and the amino acid tyrosine. T4 is then broken down to its more active form T3 by a group of enzymes called deiodinases and mainly found in the liver and kidneys [1, 3].

The thyroid is a gland at the base of the neck, near the Adam’s apple, that produces T3 and T4 hormones. TRH and TSH stimulate the release of T3 and T4, which in turn suppress TRH and TSH.

Hypothyroidism is a deficiency in thyroid hormone production by the thyroid gland. Its main symptoms include [4, 5]:

Additionally, hypothyroidism can be classified based on the blood levels of the main hormones [6, 5]:

Hypothyroidism is, in simple terms, a deficiency in thyroid hormone production or a resistance to thyroid hormones. It causes fatigue, weakness, depression, cold intolerance, and other symptoms, and it is classified based on whether thyroid hormones and TSH are high or low.

How Does It Affect the Brain?

The main effect of low thyroid hormone and high TSH levels on the brain is a size reduction in the region that controls memory and learning (hippocampus). Hypothyroidism prevents the birth and branching of brain cells, and their ability to form and strengthen connections [7, 8, 9, 10, 11].

Low thyroid hormones also reduce oxygen supply (through a reduced blood flow) and sugar breakdown in regions controlling memory and attention (hippocampus, amygdala, and anterior cingulate cortex). This may result in reduced production and usage of the energy molecule ATP [12, 13, 14, 15].

What Is “Brain Fog”?

“Brain fog”, also known as ‘mental fog’, ‘clouding of consciousness’, and ‘cognitive dysfunction’, is an unofficial term used to describe a constellation of cognitive symptoms such as [21, 22]:

Because these symptoms are generally subjective, doctors can consider them too mild or unspecific to diagnose cognitive impairment.

“Brain fog” may result from many causes, but some scientists believe nearly all involve inflammation and free radicals damaging the brain regions responsible for emotions, cognitive, and executive function – the limbic system [23, 21, 24].

People with undiagnosed or poorly managed hypothyroidism often report forgetfulness, difficulties finding the right words, and lack of attention. But does this mean that hypothyroidism is a “brain fog” trigger? Let’s look at the research to find out more.

In any case, remember that the link between the different types of hypothyroidism and “brain fog” symptoms has been mainly investigated in cohort studies. While these studies can associate a condition with certain symptoms, they cannot establish it as the cause of these symptoms.

“Brain fog” is an informal term for a collection of symptoms including reduced mental clarity, memory deficits, difficulty focusing, slow thinking, and fatigue. It can be triggered by causes as varied as anxiety, certain medications, and autoimmune disease.

This condition is linked to some “brain fog” symptoms, especially in elderly people, as seen in 6 observational studies on over 200 people. The main finding was reduced memory (especially verbal) but some studies also reported problems with [29, 30, 31, 32, 33, 34]:

The symptoms are generally reversible with thyroid replacement therapy, even in the most severe cases, as seen in 3 small clinical trials on 56 adults and 58 children [35, 36, 37].

However, cognitive symptoms may persist in a few people. For instance, a study on over 100 people found reduced memory and attention despite following this therapy for 5.5 years [38, 39].

Meta-analyses found insufficient or only weak evidence to associate subclinical hypothyroidism with cognitive problems. Generally, the most severe cases (those with the highest TSH levels) were most likely to experience symptoms [61, 62, 63, 64].

Subclinical hypothyroidism rarely requires therapy. In the most severe cases, the symptoms can be reversed with thyroid hormone replacement [65, 44, 19, 20].

Researchers disagree about whether subclinical hypothyroidism can cause “brain fog” symptoms.

Hashimoto’s thyroiditis is an autoimmune disease in which the immune system produces antibodies that target and progressively damage the thyroid gland. This may cause hypothyroidism and may manifest as “brain fog” [66].

Alternatively, there is a rare type of autoimmune brain disease that may arise in stroke-like episodes or progressively damage the brain. Although its link to Hashimoto’s thyroiditis remains unclear, the condition is called Hashimoto’s encephalopathy because it’s also associated with high levels of antibodies against the thyroid gland [67, 68, 69].

Brain imaging studies of people with this condition showed varied results. Some brains had a normal appearance, while others had alterations in white matter, reduced blood supply, swelling, and injuries [78, 79, 80, 81, 82].

Some scientists hypothesize that thyroid antibodies may damage the brain (including myelin) or cause inflammation in the brain blood vessels [78, 83].

Hashimoto’s thyroiditis may cause “brain fog” symptoms. If left untreated, this condition may present with slow thinking and difficulties concentration, progressing up to memory loss and speech disorders.

Euthyroid sick syndrome, also known as non-thyroidal illness, is a condition in which people with a functional thyroid gland have low thyroid hormone levels. This situation is most common in people who are starved, severely ill, or have undergone major surgery [84].

Major surgery triggers the production of the cytokine IL-6 to stimulate the stress response. High levels of this cytokine are associated with lower T3 levels and reduced conversion of T4 into T3. Sedatives further reduce T3 levels by blocking its production in the liver [85, 86, 87, 88].

The resulting hypothyroidism, together with the toxicity of sedatives to the brain and frequent fasting, may result in “brain fog”-like symptoms in people undergoing major surgery [89, 90, 84].

In another study on over 600 people, euthyroid sick syndrome was more frequent among the very elderly (over 100 years old). In this group, it was associated with worse cognitive performance and health status [92].

People with a functional thyroid gland may have low thyroid hormones if they are starved, severely ill, or recovering from major surgery. This condition, known as euthyroid sick syndrome, may cause “brain fog” symptoms.

Effect of Thyroid Medications on the Brain

Levothyroxine (LT4) is a synthetic form of T4. It’s routinely used as replacement therapy for hypothyroidism, with proven evidence of its effectiveness [4].

Levothyroxine, a synthetic form of T4, is the most common treatment for hypothyroidism. It improves memory and cognitive deficits caused by low thyroid hormones.

Some people complain about hypothyroidism symptoms even after LT4 therapy. Despite the popular belief that adding T3 may increase its effectiveness, the combination wasn’t better than LT4 alone in 3 clinical trials on almost 300 people [111, 112, 113].

However, the combination may be preferred in people with reduced T3 production. This includes those with mutated variants of the enzyme that breaks down T4 into T3 (type 2 deiodinase), thyroid cancer, or who have undergone thyroid removal [118, 119, 120, 121].

Desiccated thyroid extract is a mix containing both T3 and T4. In a clinical trial on 70 people with hypothyroidism, this extract was as effective as LT4 alone at improving the symptoms (including cognitive problems). An advantage was that people on this therapy tended to be more satisfied, possibly because it made them lose weight [122, 123].

A future avenue of research involves adding vitamin E to LT4 therapy as some scientists believe it will increase its effectiveness for cognitive symptoms because it protects the brain from free radicals. This combination was better than LT4 alone in rats [124].

Talk to your doctor if you have hypothyroidism and associated “brain fog” symptoms despite treatment with LT4 and discuss if these combined therapies might help in your case. Carefully follow your treatment plan and never change or discontinue it without consulting your doctor beforehand.

For more about complementary strategies that may help manage “brain fog” symptoms, check out this post.

Some researchers have recommended a combination of T3 and T4 for people who do not respond optimally to levothyroxine alone. Your doctor may consider this option if you continue to have troublesome symptoms even while taking levothyroxine.

Several studies have linked hypothyroidism to an increased prevalence of certain conditions. Note, however, that just because hypothyroidism is associated with a disease, it doesn’t necessarily mean that everyone with hypothyroidism will actually develop the disease! Many different genetic and environmental factors can influence the risk.

A study on 70 people with a family history of Alzheimer’s disease found a high prevalence of autoimmune hypothyroidism (41%), suggesting that the genes responsible for both conditions might be inherited together [125].

The association of subclinical hypothyroidism with Alzheimer’s is weak to nonexistent. A study on almost 2k elderly people found it increased the risk only in women, while 3 other studies on almost 2k found no link between both conditions [126, 127, 128, 129].

Similarly, subclinical hypothyroidism – as opposed to hyperthyroidism – wasn’t associated with an increased risk of dementia in 2 studies on over 12k people [130, 131].

Conversely, another study on over 650 people associated this condition with an increased risk of brain damage due to reduced blood supply (vascular dementia) [129].

The effects of a history of thyroid replacement therapy are also unclear. A study on ~500 people associated it with an increased risk of Alzheimer’s, while another one on over 2500 didn’t [132, 133].

Some researchers have suggested that certain types of dementia and autoimmune hypothyroidism may be linked, though the evidence is mixed.

Subclinical hypothyroidism was associated with an increased risk of heart disease (such as heart attack, congestive heart failure, and irregular heart rate) in 4 studies on over 9k people [134, 135, 136, 137].

Similarly, high blood cholesterol, clogged arteries, and brain strokes were more frequent among people with a history of thyroid replacement therapy in a study on over 27k people [133].

Hypothyroidism is when your thyroid gland doesn’t make enough thyroid hormones. “Brain fog” is not a medical condition but a term used for a group of symptoms that can affect your cognition, mood, and energy.

Though the causes of hypothyroidism are diverse, it may manifest in “brain fog” symptoms. Most people experience forgetfulness, lack of focus, and learning difficulties. Some researchers believe that oxidative stress and inflammation play a role in these symptoms.

Does CBD Oil Work for Migraines?