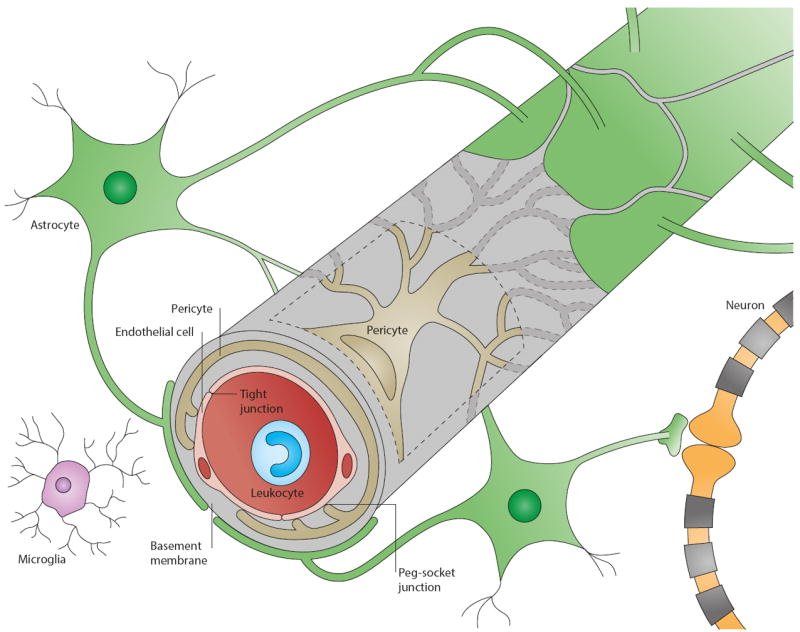 A leaky blood-brain barrier (BBB) is thought to play a role in different neurological and psychiatric disorders, including “brain fog”, Alzheimer’s disease, depression, schizophrenia, and more. However, the research in this field is still young, and scientists are yet to unravel potential connections.

When discussing issues with the BBB, it is important to note that a problem does not always start in the brain. Diseases and other problems elsewhere in the body, such as diabetes or gut inflammation, may trigger a “leaky brain.” In this post, we cover the top 11 factors that can disrupt the blood-brain barrier.

Strokes cause a lack of glucose and oxygen. This leads to a rise in potassium, the depletion of ATP, and a release of glutamate, which all contribute to blood-brain barrier disruption [1].

After a stroke, reperfusion (restoration of blood flow to the brain or tissue) occurs. Reperfusion may cause additional tissue damage and an increase in inflammation, which also worsens the BBB condition [1].

In a study of human brain tissue from five cases of fatal strokes, MMP9 levels were higher in the affected areas. Higher MMP9 levels are a good indicator of increased BBB permeability [3].

After traumatic brain injury, the blood-brain barrier also becomes dysfunctional. This leads to the leakage of proteins and negatively affects immune cells [4].

BBB breakdown may last from several days to weeks after head trauma. In some cases, the BBB can be dysfunctional for years [5].

Head trauma injures blood vessels in the brain. It leads to impairments in brain-blood flow, BBB permeability, and metabolic processes. It also reduces oxygen levels in the brain, which further induces BBB breakdown [5].

Traumatic brain injuries also cause damage to the neurovascular unit. When the nerve cells die quickly, it causes another cycle of injury after the initial brain injury [6].

There is a loss of tight junction molecules in brain tumor blood vessels. Tumors also affect cell formation and prevent the release of factors necessary for blood-brain barrier (BBB) function [7].

Brain tumors also cause fluid to leak into the brain. The open tight junctions cause brain edema [8].

In a study of 10 patients with brain tumors, brain scans showed an increase in BBB permeability [9].

Another study of mice with brain tumors had similar results. The mice had an increased BBB permeability to sodium fluorescein (a marker for BBB integrity). BBB breakdown is also associated with faster cancer growth [10].

It is difficult to treat brain tumors because the BBB prevents the transport of drugs into the brain. Scientists are currently studying new therapies that are able to cross the blood-brain barrier [10].

An increase in brain blood pressure may cause hypertensive encephalopathy. Symptoms include severe headache, confusion, and impaired judgment and memory. Coma, convulsions, and other brain problems can occur afterward [11].

Breakdown of the blood-brain barrier (BBB) during increased brain blood pressure leads to reduced blood flow and excess fluid in the brain [12].

During hypertensive encephalopathy, BBB dysfunction is widespread. It can cause brain edema, which is the life-threatening excess accumulation of fluid in the brain. Although there are methods to stop brain edema, there are no treatments that specifically target the BBB [12].

The obesity-induced inflammation may cause problems in the blood-brain barrier (BBB) [14].

Diet-induced obesity leads to an increase in proinflammatory cytokines, which increases BBB permeability [14].

High-fat diets and obesity cause blood vessel problems, damaging the BBB integrity. In a study of male rats, in comparison to mice fed a healthy diet, a high-fat diet increased BBB permeability [16].

Moreover, the results of this study suggest that vitamin D supplementation helps protect the BBB. Although it does not seem to have any effect on the control group, vitamin D treatment significantly improved BBB integrity in rats fed a high-fat diet [16].

The rats fed a high-fat diet but did not receive vitamin D supplementation had higher BBB permeability [16].

Elevated glucose levels increase oxidative stress in the brain and pericytes. This kills the pericytes (by apoptosis) and disrupts the blood-brain barrier. By blocking glycolysis (the breakdown of glucose), BBB pericytes are protected [18].

During diabetes mellitus, reactive oxygen species accumulate at the blood-brain barrier. This causes oxidative damage, further damaging the BBB and increasing its permeability [19].

Researchers tested BBB selectivity in diabetes-induced rats. Results indicated that diabetes caused the loss of tight junction proteins and increased MMP-9 activity, which led to an increase in BBB permeability [20].

“Leaky gut” happens when the permeability of the intestine increases. This may also contribute to a leaky brain [21].

The blood-brain barrier (BBB) helps exchange information between the brain and the gut. The BBB transports peptides and proteins from the brain to the gut and vice versa [22].

In addition, “leaky gut” may contribute to the onset of inflammation and diabetes, which also contributes to BBB damage [21].

HIV infection and viral proteins damage the blood-brain barrier’s integrity. This also contributes to the progression of HIV-associated brain disorders [24].

During HIV infection, the virus infects CD4+ T cells and monocytes, which then cross the BBB and spread the infection. Because the BBB does not allow for the easy transfer of foreign molecules, it is hard to treat HIV [24].

In the HIV-infected tissue, the BBB had high permeability, cell death, and abnormal interactions with blood vessels [25].

Although combination antiretroviral therapy helps decrease the viral load in the body, it cannot lower virus levels in the brain. Nanocarriers have the potential to cross the BBB and reduce HIV virus levels. More studies are needed to be performed before an effective therapy is found [24].

There are many ways that bacteria disturb the blood-brain barrier. These ways include disrupting the tight junctions through toxic effects, inducing inflammation, or interfering with junction formation [28].

Lyme disease, or Lyme neuroborreliosis, is an infectious disease. It is a bacterial infection which is transmitted to humans by the bite of infected ticks. B. burgdorferi bacteria invades the immune system and also spreads to the brain and nervous system by crossing the blood-brain barrier (BBB) [29, 30].

Spinal fluid samples from Lyme disease patients showed higher levels of blood proteins (fibrinogen and immunoglobulin) compared to healthy subjects. This is evidence that the BBB integrity is compromised during Lyme disease [31].

Researchers used to think that B. burgdorferi bacteria-induced plasminogen activators and MMP production. These enzymes degrade tight junction proteins that help with BBB selectivity. This increased BBB permeability and allows for the bacteria to cross it [32, 30].

However, in a study of human cell culture, there was no indication of tight junction protein dysfunction. The exact mechanism by which the bacteria lower BBB permeability is still unknown [30].

After consumption, alcohol readily crosses the BBB. Alcohol damages the tight junctions in the gut and allows LPS (a bacterial toxin) to leak into the bloodstream. This eventually leads to the release of proinflammatory cytokines into the blood that crosses the BBB [35].

In one study, researchers concluded that one episode of binge drinking does not cause brain damage. However, repeat cycles of alcohol consumption and withdrawal cause severe BBB dysfunction and brain damage [33].

In rats, alcohol consumption caused the BBB to be more susceptible to damage from LPS toxin injection (simulating leaky gut). It prolonged the inflammatory response, but it suppressed programmed cell death in nerve cells. Chronic alcohol drinking makes you more susceptible to infection and inflammation-related disease by letting toxins through the BBB [36].

The liver releases the breakdown products of injured liver cells into the bloodstream during acute liver failure. This includes pro-inflammatory cytokines like TNF-alpha, IL-1, IL-6, and ammonia. These cytokines cause brain inflammation [37].

The inflammation causes the blood-brain barrier (BBB) to become more permeable. BBB dysfunction causes fluid to accumulate in the brain. In one study of postmortem acute liver failure patients, 80% showed evidence of fluid in their brains [37, 38].

In acute liver failure patients, the injured liver released MMP9 into the bloodstream. The circulating MMP9 damages the tight junctions at the BBB. This increases BBB permeability and allows brain damage to occur [37].

It is possible for BBB permeability to return to normal levels if the patients quickly receive a liver transplant. However, there is still a possibility that the transplant will occur too late while the brain injury still progresses [37].

To learn Joe’s thoughts and approach to leaky blood-brain barrier and how it can change overall health, check out SelfHacked Secrets.

This section contains a sponsored link. The proceeds from your purchase support our research and work. Thank you for your support.