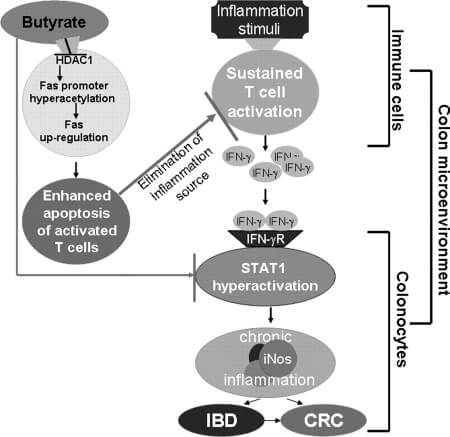 The gut microbiota and the short chain fatty acids they produce may affect energy absorption and weight gain. Thus, the gut flora may have an impact on whether a person is fat or thin. Read on to learn more.

Short-chain fatty acids (SCFAs; acetic, propionic and butyric acid) are formed during bacterial fermentation of carbohydrates in the colon.

SCFAs cause low intestinal pH from the ileum (end of the small intestine) to the cecum (beginning of large intestine), which prevents the overgrowth of bad bacteria (like Enterobacteriaceae and Clostridia) [1].

SCFAs help fix ‘leaky gut’, strengthening the intestinal wall by increasing the secretion of mucin-2 (MUC-2), which then prevents LPS from crossing the barrier [2].

SCFAs In the Human Gut

Out of the total SCFAs present in the colon, 90%-95% are acetate, propionate, and butyrate in healthy people.

Most of the SCFAs are absorbed in the colon, being exchanged with bicarbonate [1].

SCFAs are acidic, while bicarbonate is alkaline.

There is some conflicting information on SCFAs and weight. On the one hand, they increase caloric utilization. On the other hand, they have been inversely associated with obesity. Overall, butyrate seems to be broadly protective against obesity, propionate has mixed associations, and acetate is linked to weight gain [1].

The fecal concentration of SCFAs is 20% higher in obese individuals than in their lean counterparts. According to some researchers, this may reflect a compensatory protective mechanism against obesity, in which a greater amount is eliminated from the stool [2].

This would prevent the increased accumulation of SCFA in the intestines, which may cause weight gain (mainly from acetate) [2].

SCFAs like butyrate and propionate increase the formation of the gut hormones glucagon-like peptide-1 (GLP-1) and polypeptide YY (PYY). These reduce food intake by decreasing appetite [3].

Butyrate reduces food intake and has been linked to weight loss.

Researchers are also investigating butyrate’s potential to combat autoimmunity, cancer, and psychological disorders. Butyrate, which is primarily produced by Firmicutes bacteria in the gut, appears to affect gene expression in the brain [4, 1].

Butyrate is primarily used by colon cells as a major source of energy [1].

Butyrate production is affected by the quantity of bacteria that produce butyrate and by the pH of the large intestine [1].

In the mitochondria of colon cells, 70% to 90% of butyrate is oxidized into acetyl-CoA, which is subsequently processed through the tricarboxylic acid cycle to generate a large quantity of ATP [5].

Propionate also reaches the liver via portal circulation, where it is used to produce glucose. Propionate has observed effects that may promote or suppress obesity, but overall it seems to be protective against obesity [1].

Acetate and propionate are the main products of Bacteroidetes [1].

Of all the three SCFAs, acetate seems to cause the most weight gain. However, it also has some properties that are believed to protect against obesity. According to some researchers, it may act against weight gain in the hypothalamus (arcuate nucleus) by increasing GABA [6].

A substantial proportion of acetate in the intestine is readily absorbed and reaches the liver (via portal circulation), where it’s used to create cholesterol [7, 3].

Human studies have shown that when lactulose (metabolized by microbiota to produce high amounts of acetate) was administered to the diets of six volunteers for two weeks, there was a significant increase in both total and LDL cholesterol, ApoB, and blood levels of acetate [7].

Acetate and propionate are the main products of Bacteroidetes [1].

Obese animals and people have a lower microbiome diversity, a lower percentage of Bacteroidetes, Verrucomicrobia, Faecalibacterium prausnitzii and a higher percentage of Firmicutes and Actinobacteria. Some of these results have not been reproduced in subsequent studies [1].

Other Bacterial Species and Obesity

The following microbes have less evidence in causing obesity:

Methane-producing Archaea have been found to be present in greater abundance in obese mice and humans compared to lean subjects [1].

Cocolonization with M. smithii with B. thetaiotaomicron led to the fermentation of dietary fructans to acetate, resulting in a significant increase in fat creation [8].

M. smithii is found in 70% of human beings. It generates methane. It has been found to enhance the fermentation of polysaccharides and other carbohydrates by removing hydrogen atoms, leading to greater production of SCFAs and hence, their increased absorption. These SCFAs function as an extra source of energy which may contribute to weight gain and subsequent obesity [9].

The numbers of hydrogen-producing Prevotellaceae (a Bacteroidetes) and Methanobacteriales (Archaea, which are hydrogen-oxidizing methanogens), were at a higher level in obese individuals compared with lean subjects and with those after gastric bypass. The investigators hypothesized that hydrogen was reduced, which allowed greater production of SCFAs. This leads to more energy that is absorbed across the intestines (was not reproduced) [8].

Prevotellaceae is a source of LPS [2], which causes inflammation.

C. ramosum in the mucosa of the small intestine of mice increase body fat as a result of an increase in intestinal absorption of glucose and lipids [10].

The intestines of obese humans and mice have been found to contain [1]:

Resistant starches are dietary carbohydrates that the human gut cannot digest on its own. Instead, certain gut bacteria ferment these starches into SCFAs – primarily butyrate. Some researchers have argued that eating a diet rich in resistant starch could promote the growth of butyrate-producing bacteria [14, 15].

Resistant starch can be bought in powder form (for example Jo’s Resistant Starch) or obtained from dietary sources. These include [16, 17]:

If you are looking to increase your intake of resistant starch, consider working with a doctor or trained nutritionist to design an individualized diet.

5 Steps that May Regenerate the Liver Naturally