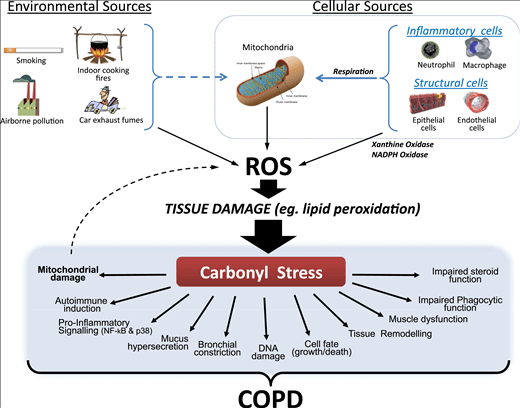 One theory suggests that oxidative stress may underlie different diseases, including mental health and brain disorders, heart disease, diabetes, and more. Is there scientific ground to this theory and what exactly is oxidative stress? We go into the science behind it to explain how the body strikes a balance between free radicals and antioxidants to maintain good health.

What is Oxidative Stress?

Scientists commonly use the term “oxidative stress.” It refers to a relative dominance of free radicals over antioxidants. It means that more free radicals are being produced than can be neutralized or removed from the cells, tissues, or the body as a whole [1, 2].

To a certain extent, free radicals are normally produced in the body. They support immune defense and help cells communicate. But an excess of free radicals, such as from toxin exposure and pollution, may lead to tissue damage [2].

Reactive oxygen species (ROS) is an umbrella term for a variety of highly reactive molecules or oxidants. The most prominent members include superoxide (O2·−), hydroxyl (OH·), and peroxy radical (ROO). The mitochondria are their main production site [1, 3].

Reactive oxygen species (ROS) are produced by all cell types that line blood vessels, muscles, and connective tissue with the help of numerous enzymes. They are also produced by neutrophils and macrophages during inflammation, which is needed short-term to help the body fight off infections [4, 3].

The rate and magnitude of oxidant formation are usually balanced by the rate of oxidant elimination. Oxidative stress is when prooxidants override antioxidant defense [5].

Some research suggests that oxidants can also be generated by:

Roles of Free Radicals in the Body

It has become apparent to scientists that plants actively produce ROS as a way to control processes such as programmed cell death, stress responses, defense against microbes and cellular communication [7].

Research suggests that we might use free radicals in a similar way.
That means that our bodies don’t only have “antioxidant defense,” as most people see it. We also seem to have “free radical defense.”

In humans, free radical reactions are essential for defense against microbes. Neutrophils, macrophages and other cells of the immune system produce them. However, their overproduction can have a counter-effect, leading to tissue injury and cell death [1].

ROS within cells act as communication molecules. In low concentrations, they appear to increase the growth, reproduction, and survival of cell types. In high concentrations, they may induce cell death. This is being researched as a potential cancer-fighting approach [3].

Researchers point to their other roles in the body, such as regulating cellular calcium, protein phosphorylation, and transcription factors – all of which are seen as crucially important for human health [3, 2].

The majority of studies covered in this section deal with associations only, which means that a cause-and-effect relationship hasn’t been established.

Also, even if a study did find that free radicals can contribute to heart disease, they are highly unlikely to be the only cause. Complex disorders like heart disease always involve multiple possible factors – including biochemistry, environment, health status, and genetics – that may vary from one person to another.

According to limited research, as many as 200 human diseases have been associated with increased levels of oxidative stress. These include the following [8]:

Some studies had conflicting findings. More research is needed.

Scientists found that high concentrations of ROS can damage structures within cells, including fats (in membranes), proteins, and nucleic acids that build RNA and DNA. What constitutes “high levels” in our day-to-day life has yet to be determined, though [3].

According to one hypothesis, oxidative damage accumulates during the life cycle, and it may play a role in the development of age-related diseases such as arthritis, dementia, and others. Although possible, large-scale evidence is still lacking to firmly establish this hypothesis [3, 2].

People with both type 1 and 2 diabetes seem to have high levels of free radicals, according to some estimates. The onset of diabetes has been associated with oxidative stress, but its exact role is still unclear [1].

Too much oxidative stress relevant to antioxidant levels is also hypothesized to impair sugar balance [1].

In one study, oxidative stress was suggested to accelerate diabetes complications by damaging proteins. Another study suggests that oxidative stress byproducts contribute to insulin resistance, a hallmark of type 2 diabetes. Large scale data are needed [1].

Oxidative stress damages and impairs the functioning of several kinds of proteins, harming the lungs in ways that can induce COPD, a chronic lung disease. The main cause of COPD is smoking, a major source of toxic chemicals and trigger of excess free radicals in the body [10].

Scientists think this cycle is hard to break because oxidation makes various proteins lose function, and that hinders the body’s ability to restore a healthy oxidant/antioxidant balance [11].

The link between free radicals and cancer is still unclear.

Researchers explain that DNA mutation is a critical step in cancer formation. Excessive DNA damage caused by free radicals (as measured by 8-OH-G) has been found in tumors. One unproven hypothesis states that this type of damage may underlie cancer initiation, but solid evidence is lacking [3].

Low levels of oxidative stress are thought to stimulate cell division in the promotion stage. Some scientists think that this might, along with many other complex factors, stimulate tumor growth. This hasn’t been proven in humans either, but [3].

Based on these findings, though, an excess of antioxidants might theoretically increase the growth of existing tumors. This hasn’t been confirmed in large-enough studies, but some human findings are available.

In one study of breast cancer patients, antioxidant use during chemotherapy or radiation therapy was associated with worsened breast cancer prognosis in postmenopausal women [12].

A mice study published in 2019 even casts doubt on regularly using well-known antioxidants to improve health. The antioxidant N-acetylcysteine protected from COPD (lung emphysema) but induced lung cancer in mice [13].

It seems that tilting the balance in either direction – toward free radical excess or deficiency – may be detrimental.

It’s no surprise that antioxidant supplements aren’t a panacea – studies suggest that they are more likely to be harmful. But future research should clarify whether – and to what extent – antioxidant status and supplementation affect cancer risk.

Living organisms have evolved a number of antioxidant defenses to maintain their survival against excessive oxidative stress [4].

Some common antioxidants include vitamins A, C, and E, glutathione, and the enzymes superoxide dismutase, catalase, glutathione peroxidase, and glutathione reductase [14].

They work in synchrony when balanced. The body can produce some of them, while we can get the others in adequate amounts from a healthy diet [14].

The optimal source of antioxidants seems to come from our diet, not from antioxidant supplements, especially in well-nourished populations [15].

Antioxidant supplements, on the other hand, have no known health benefits.

They have not been approved by the FDA for medical use. Supplements generally lack solid clinical research. Regulations set manufacturing standards for them but don’t guarantee that they’re safe or effective.

According to the National Center for Complementary and Alternative Health [16]:

“Rigorous scientific studies involving more than 100,000 people combined have tested whether antioxidant supplements can help prevent chronic diseases, such as cardiovascular diseases, cancer, and cataracts. In most instances, antioxidants did not reduce the risks of developing these diseases.”

Additionally, antioxidant supplements were not associated with a lower risk of dying in other studies [17, 18].

Concerns have been raised about associations between high doses of certain antioxidants and health risks. Beta-carotene supplementation has been linked with lung cancer in smokers, vitamin E with prostate cancer, and vitamin A with a higher risk of dying [17, 18].

Additionally, antioxidant supplements may interact with some medicines. Supplement-drug interactions can be dangerous and, in rare cases, even life-threatening.

Always consult your doctor before supplementing or making major changes to your diet and let them know about all drugs and supplements you are using or considering.