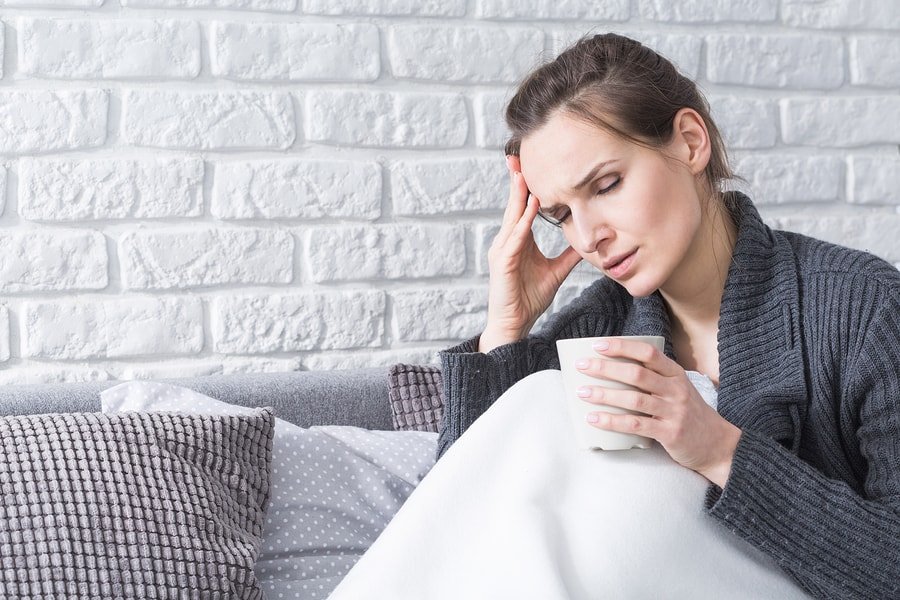 Ocular migraines are those that cause vision loss in one eye. They are usually harmless but may be accompanied by a headache. Although the direct cause of ocular migraines is unknown, some environmental factors may play a role in their development. Read on to find ways to combat ocular migraines and learn more about the disease as a whole.

What Are Ocular Migraines?

Ocular migraines (otherwise known as retinal, ophthalmic, or anterior visual pathway migraines) are visual disturbances in one eye possibly accompanied or followed by a headache. They are more common in adults under the age of 40 who have past histories of headaches or other migraine types. Roughly 75% of ocular migraine patients suffer from occasional symptoms [1, 2].

The visual disturbances that accompany ocular migraine episodes are considered harmless. They usually last for less than 5 minutes, but at times can last up to half an hour. The longest recorded ocular migraine was 7 hours, but even then the patient fully recovered [1].

Although there are no data about ocular migraines in particular, all types of migraines are more common in women; every 1 in 5 women will have migraines, as opposed to only 1 in 15 men. People of European descent have a higher risk (20%), followed by those of African (16%) and Asian (9%) descent [1].

People over the age of 50 who start having ocular migraines should see a doctor to check for more serious underlying diseases (such as carotid or heart disease) [1].

Similarly, the diet plays a smaller role in ocular migraines than in any other migraine types. Nevertheless, overconsumption of alcohol, coffee, tyramine, monosodium glutamate, and aspartame may increase the frequency of ocular migraines [1].

It’s still unknown exactly how ocular migraines occur. One possible explanation is “spreading depression”, a phenomenon during which a wave of inactivity spreads across the brain, temporarily shutting down areas that were overactive [6, 7].

Vision loss in ocular migraines may develop from:

In both scenarios, the narrowing of the main eye artery is the main cause of temporary vision loss [1, 4, 13].

Hormones may also play a role, especially since ocular migraines are more common in women than in men. In fact, stopping birth control pills can reduce the risk of ocular migraines [14, 1].

The following symptoms are commonly associated with ocular migraines. Consult it with your doctor if you experience several of these symptoms for an appropriate diagnosis and treatment.

The main visual symptoms during an ocular migraine, in order of prevalence, are the following [15, 1]:

Often, these symptoms resolve within 30 minutes. A permanent visual loss is very rare [1].

Pupils may become dilated for seconds to hours after ocular migraines [16].

Headaches are also common and may happen during, after, and, in rare cases, before the visual loss. They are usually one-sided. It is estimated that 41% of patients get headaches during the visual loss while 25% develop headaches at other times [2, 15].

Prinzmetal’s angina (chest pain due to exercise), and Raynaud’s disease (a condition where parts of the body may feel numb due to reduced blood flow), can occur with ocular migraines [17].

Complications from ocular migraines are rare. The main ones include:

Ocular migraines are usually temporary and short in duration, so treatment is usually not required if the symptoms are mild and occur with a frequency lower than once per month [1].

When migraines happen more often or cause permanent vision loss, it’s important to consult a doctor to determine their cause. In addition to recommending rest until the pain is gone and the vision goes back to normal, doctors will normally prescribe the following drugs to relieve the symptoms:

The use of non-steroidal anti-inflammatory drugs (NSAIDs) has not been studied for ocular migraines specifically, but they may help relieve the pain. The NSAID drug mainly used is aspirin, which is often combined with other drug treatments [1].

The combination of aspirin, caffeine, and acetaminophen (Excedrin Migraine) may help in mild cases.

Side effects of aspirin use include stomach bleeding, increased risk of heart attack or stroke, and kidney toxicity. Importantly, aspirin and other painkillers may cause medication-overuse headaches when taken for too long [28].

Potential negative interactions can come from the concurrent use of blood pressure medications, blood thinners, antidepressants, alcohol, and antirheumatics [28].

Calcium channel blockers such as nifedipine and verapamil work by reducing sudden contractions of the eye’s arteries, which reduces the release of serotonin and the occurrence of “spreading depressions” [29, 30, 10].

In a clinical trial on 9 people suffering from ocular migraines, the use of calcium channel blockers halted all episodes. When the treatment was discontinued, the ocular migraines returned [29].

Calcium channel blockers have a rapid onset of action. Nifedipine tablets placed under the tongue were able to block ocular migraines within 30 seconds in one patient and within 10 minutes in another [31].

Side effects of calcium channel blockers include [32]:

It is not advised to take calcium channel blockers with beta-blockers [30].

Triptans (such as sumatriptan and rizatriptan) reduce the pain from ocular migraines by blocking pain perception in the brain. However, they may increase the risk of heart disease or stroke and are not recommended in people with a history or risk of these conditions [1].

Dihydroergotamine (Migranal) was one of the first drugs approved for migraine treatment. Traditionally available as a nasal spray or injection, new non-oral, non-injected forms of supplementation are being developed to improve its bioavailability and ease of administration [33].

Side effects can include worsening of vomiting and nausea. Dihydroergotamine is not recommended in people with coronary artery disease, high blood pressure, or kidney or liver disease [33].

Lasmiditan (Reyvow) is a newly approved oral tablet that improves pain, nausea, and sensitivity to light and sound. Because it depresses the nervous system, it shouldn’t be taken in combination with drugs that also have this effect (such as alcohol). People on lasmiditan shouldn’t drive or operate heavy machinery because it may cause dizziness and drowsiness [34].

Other drugs reported to improve ocular migraines in some cases include:

The first option to prevent mild, occasional ocular migraines is to make lifestyle changes. However, you should contact your doctor immediately if you experience frequent, severe migraines or their frequency is not reduced after implementing these strategies.

Reducing the consumption of these foods/compounds can also help prevent ocular migraines [1]:

*Although coffee may worsen migraines in some people, it may actually benefit others. It owes this effect to caffeine, which was shown to reduce some migraine types. Green and black tea also contain caffeine in high amounts [38].

If you have frequent, long-lasting ocular migraines and lifestyle changes do not help, your doctor may recommend different medications. Carefully follow their recommendations and never change the dose or discontinue the medication without letting your doctor know.

Although not specifically developed for ocular migraines, certain antiepileptic drugs such as divalproex sodium, gabapentin, and topiramate can reduce migraine frequency [39].

Antidepressants such as amitriptyline are also commonly used to prevent migraines. Because they may have adverse effects such as drowsiness and weight gain and may even cause withdrawal symptoms, other medications are normally preferred [41].

Calcitonin gene-related peptide (CGRP) is a messenger protein released during migraine attacks and other headache episodes. Antibodies that target this protein, such as erenumab, fremanezumab, and galcanezumab have been approved as injectable drugs to prevent migraines [42].

Botox injections may also help in some people [43].

There are many natural treatments proposed to help prevent migraines. Although none have been studied specifically in people with ocular migraines, the fact that this type of migraines shares many mechanisms and causes with other types suggests they may help as complementary approaches. Discuss it with your doctor before taking these supplements and never use them in place of what your doctor recommends or prescribes.

The TENS device and tDCS may also improve migraines, based on several studies [53].

If you’re curious to learn more about natural migraine treatments, you can also read this SelfDecode post.

Eye nerves can become deformed in people who suffer from other migraine types, putting them at higher risk of ocular migraines due to blockages in the arteries involved [54, 55].

Patients with blood clotting disorders are also 3 times more likely to develop a blockage in the artery involved in ocular migraines (retinal) [1].

Some diseases that may increase the risk of developing ocular migraines include lupus, artery hardening (atherosclerosis), and sickle cell disease [29, 56, 57].

Other factors such as age and history of heart disease may play a role in the risk of developing ocular migraines [1].

The main limitation is that ‘ocular migraines’ are not well-defined. To this day, there are many names for ocular migraines and physicians may be confused between the different types of migraines [1].

Migraines are difficult to characterize due to the many presentations and versions of a migraine. It is also rare for physicians to be present during the migraine attack. This makes naming, classifying, and treating migraines difficult [1].

Many studies only focus on the more prevalent migraines, such as migraines with aura or simply migraines in general [59, 11, 60].

Finally, there are not many studies on ocular migraines due to their rarity. The available studies often have small sample sizes and include case studies [61, 62, 21, 1].

Causes of Low / High Hemoglobin Levels & How to Improve