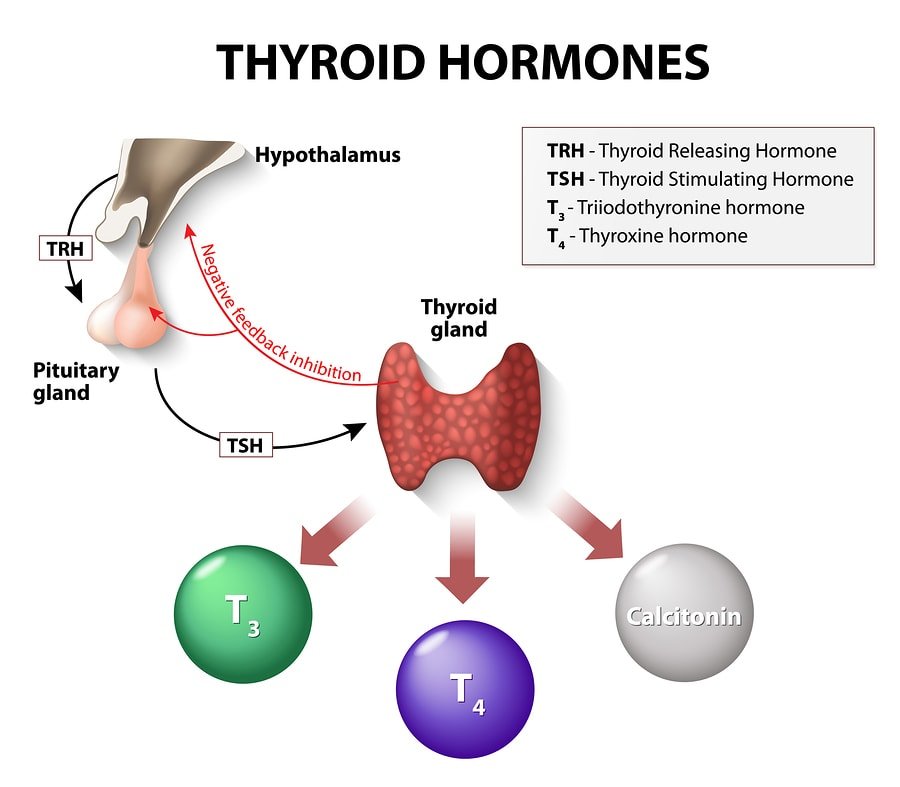 In addition to well-established causes, dysfunction in other pathways or organ systems may contribute to thyroid disorders. These include microbiome impairment, stress, toxin exposure, nutritional deficits, and more. Read this post to learn more about the thyroid hormones control, factors that may reduce them, and what you can do about it.

What are Thyroid Hormones?

T4 is synthesized from the amino acid tyrosine, found in thyroglobulin (a protein created in the thyroid). It contains four iodine atoms.

If you notice any of the symptoms described below and suspect a thyroid disorder, seek medical attention. Most thyroid conditions can be successfully treated if diagnosed on time.

Hyperthyroidism (too much T3 or T4) symptoms include:

Thyrotropin-releasing hormone (TRH) made in the hypothalamus binds to the receptors in the pituitary, causing it to release the thyroid-stimulating hormone (TSH), which then stimulates T4 production.

If there is too little of the thyroid hormones in the bloodstream, the hypothalamus signals the pituitary gland (via TRH) to produce TSH for the thyroid to release more T3 and T4.

Once there is enough of these hormones, the hypothalamus is signaled to stop the release of TRH and the cascade of actions to increase T3 and T4.

Conversion of T4 to the More Active T3

Both T3 and T4 are produced in the thyroid gland, although T3 is much more potent than T4.

Most T3 is produced by removing iodine from T4 in a process that requires selenium [2].

The total activity of T3 thyroid hormone in the body depends on the enzymes that converts T4 to T3, which are found outside of the thyroid:

Thyroxine Binding Globulin is made by the liver [3].

Factors That May Reduce Thyroid Function

Most of the below factors are not established causes of hypothyroidism. According to preliminary research, they may play a role in this complex condition, but the evidence is inconclusive. If you recognize one or more of these factors in your case, it doesn’t mean you have hypothyroidism. If you’re suspecting a thyroid condition, work with your doctor to get adequate diagnosis and treatment.

Treatment with antibiotic increased blood T4 and rT3, but did not affect T3 levels [5].

This makes TSH levels a less accurate marker to screen for hypothyroidism in the presence of stress.

In rats, injection of LPS (a bacterial toxin) suppresses the production of TRH, TSH, and T3 levels, while increasing CRH and cortisol levels. However, blocking the CRH and cortisol increase does not prevent the reduction in TRH and TSH levels due to LPS-induced inflammation [9].

Injection of IL-1, TNF, and IFN-gamma either in the blood or the brain results in a fall of blood TSH levels in rats. This may be because TNF reduces TRH production in rat hypothalamus [19, 20, 21].

Blood IL-2 levels are increased in some patients with primary hypothyroidism [24].

Overfeeding newborns during the breastfeeding period may lead to obesity, leptin resistance, and lower thyroid hormone during adulthood [25, 26].

In addition, some leptin-resistant humans have low T4 and normal TSH [29].

A leptin analog increased FT3 and FT4 in leptin-deficient children, and the reverse decreased T3 and T4 levels in people on a low-calorie diet [29, 30].

However, leptin administration does not reverse changes in thyroid hormone levels in acute fasting [31].

Fluoride was given to hyperthyroid patients to lower thyroid hormones in the past.

In a study of Indian school children, there were significant differences in TSH and thyroid hormone levels between two groups of students that are exposed to different levels of fluoride [34].

In a study of over 400 participants, “fluoride had impacts on TSH and T3 hormones even in the standard concentration of less than 0.5 mg/L” [35].

In zebrafish, mice, and rats, fluoride causes thyroid dysfunction, which could be ameliorated by taurine and calcium [36, 37, 38].

Iodine is required for the production of thyroid hormones. Iodine deficiency is a major cause of hypothyroidism, especially in developing countries [39].

However, getting more than 400mcg is problematic and may also contribute to thyroid disorders [40, 41].

Selenium is needed to convert T4 to T3. It stimulates thyroid function and protects against autoimmune thyroid conditions. Selenium deficiency contributes to hypothyroidism [42, 43, 44].

Iron is needed for thyroid peroxidase function, which is important in the synthesis of thyroid hormone [45].

Chronic anemia due to iron deficiency is a well-known factor that impairs thyroid function [46].

Vitamin A can bind to thyroid hormone receptors.

In a study on obese women, vitamin A increased T3 and lowered TSH [47].

if you’re experiencing symptoms of a thyroid disorder, it is important to consult with your doctor ASAP to ensure you get adequate medical care. They may suggest adding the complementary approaches mentioned below – but they should not be used to replace conventional medical treatment.

Keeping the discussed contributing factors in mind, in addition to suggested treatment and complementary approaches, you may want to:

Start Optimizing Your Health Based On Your Genes

Take a look at your personal genetic data to find the root cause of your health issues and build a regimen that works to overcome any negative health effects from your genes. Start your personalized journey to optimal health with SelfDecode today.