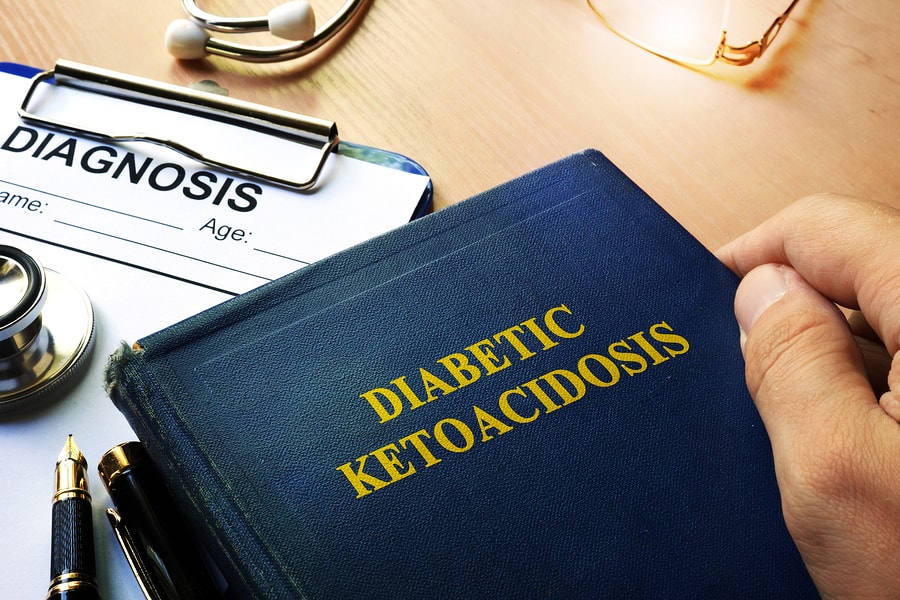 Characterized by high glucose, ketone, and acid levels in the blood, ketoacidosis is a life-threatening condition that mainly occurs as a complication of poorly managed diabetes. Keep reading to learn more about this condition, its effects on the body, and how it is diagnosed.

Ketoacidosis is a medical condition that is mainly characterized by the 3 following abnormalities [1]:

The most common type of ketoacidosis occurs as a complication of diabetes. In diabetic ketoacidosis, the low level of insulin and the excess of its opposing hormones cause the buildup of glucose in the blood and the breakdown of fatty molecules into ketone bodies in the liver [2].

Death rates from ketoacidosis in adults are below 1% in developed countries, but developing countries have higher rates (e.g., 30% in Kenya) [3, 4].

In a study on 275 children under 5 years old with newly diagnosed type 1 diabetes, 28% had ketoacidosis. This condition is the leading cause of death among children with type 1 diabetes [5, 6].

Although diabetic ketoacidosis is more common in people with type 1 diabetes, it can also occur in those with type 2 diabetes. Its frequency is higher in those of African, African-American, or Hispanic origin [7].

Other types of ketoacidosis include:

Ketoacidosis is a life-threatening condition characterized by high blood sugar, high blood and urine concentration of ketones, and high blood acidity. It is most commonly caused by diabetes.

Nutritional ketosis is the physical state when the body uses fat instead of carbohydrates for energy production as a result of fasting or a ketogenic diet [13].

Ketogenic diets are defined by low carbohydrate (typically below 50 g/day) and high fat intake and lead to the increased production of ketone bodies and fatty acids [13].

It’s important to note that eating a ketogenic diet or fasting for a controlled time period will lead to ketosis but not to ketoacidosis:

Nevertheless, other strategies such as doing more exercise or reducing your calorie intake are safer and more effective to lose weight. Always discuss with your doctor if the ketogenic diet is recommended in your case.

Ketone bodies in the blood are not always dangerous. The ketogenic diet deliberately produces a state of nutritional ketosis so that the body burns fat instead of glucose for energy.

The consequences for children can be serious. In juvenile cases, 1 to 2% of children with diabetic ketoacidosis suffer from dangerous fluid buildup in the brain.

Diabetic ketoacidosis can lead to serious complications in adults too:

Diabetic ketoacidosis can damage the muscles, kidneys, stomach, and other vital organs.

Ketoacidosis is an extremely dangerous condition. Among the possible outcomes is fluid in the brain and lungs, nerve damage, bleeding in the gut, multiple organ failure, coma, and death.

The 3 main factors that cause ketoacidosis are [34]:

Diabetics have low blood insulin levels, while certain neurotransmitters (catecholamines) and the following insulin-opposing hormones are found at high concentrations [3]:

In normal conditions, insulin prevents sugar production and fat breakdown. An imbalance between insulin and its opposing hormones triggers the mechanisms of diabetic ketoacidosis [37].

Breakdown of sugar stores releases lactate as a byproduct, which is used to make glucose [40].

In these conditions, fats are broken down into glycerol, which also makes glucose. Glucose transport into tissues is reduced, leading to glucose buildup in the blood [41, 2].

A combination of low blood insulin levels and high concentrations of opposing hormones breaks down existing fatty molecules and prevents the storage of new fats [42, 3].

The resulting fatty acids build up in the liver, where they are transformed into the following ketone bodies [37]:

Tissues cannot absorb too many ketone bodies, so eventually, these will begin to build up in the blood. They are found in the form of negatively charged ions (anions) and increase the anion gap [44].

Low blood insulin and high glucagon promotes the breakdown of fatty molecules into ketone bodies. These gradually raise the acidity of the blood, eventually causing acidosis.

High glucose levels in bodily fluids cause the movement of water and ions (electrolytes) out of cells [37].

The kidney cannot absorb too much glucose, which is found in the urine when concentrations get too high. This causes more frequent urination, which can lead to a deficiency in water and the following electrolytes [45]:

4) Other Types of Ketoacidosis

Alcohol breakdown consumes a molecule (the coenzyme NAD+) that is also required for the production of glucose [46].

Salicylate intoxication can cause acidosis by [47]:

Inborn ketoacidosis is caused by genetic defects in enzymes involved in the production and breakdown of ketone bodies [47].

Starvation, alcohol abuse, salicylate toxicity, genetic defects, and breastfeeding can also cause the depletion of sugar stores and drop in insulin required to result in ketoacidosis.

Ketoacidosis is a serious condition that may be life-threatening if untreated. If you have several of these symptoms, seek immediate medical attention so that your doctor can effectively diagnose and treat it.

If emergency nurses detect several of the symptoms listed in the previous section, they must conduct quick bedside testing for blood glucose and blood or urine ketones [51].

The blood chemistry is analyzed to determine [35]:

Additionally, urine tests must be performed to analyze [35]:

The subsequent laboratory evaluation must include [37]:

Diabetic ketoacidosis is diagnosed in the presence of [52]:

If a patient presents multiple signs and symptoms of ketoacidosis, an emergency nurse or doctor will run blood and urine tests to detect low blood sugar, ketone bodies, and acidity.

Lab results are commonly shown as a set of values known as a “reference range”, which is sometimes referred to as a “normal range”. A reference range includes the upper and lower limits of a lab test based on a group of otherwise healthy people.

Remember that some lab-to-lab variability occurs due to differences in equipment, techniques, and chemicals used. Don’t panic if your result is slightly out of range – as long as it’s in the normal range based on the laboratory that did the testing, your value is normal.

However, it’s important to remember that a normal test doesn’t mean a particular medical condition is absent. Your doctor will interpret your results in conjunction with your medical history and other test results.

And remember that a single test isn’t enough to make a diagnosis. Your doctor will interpret this test, taking into account your medical history and other tests. A result that is slightly low/high may not be of medical significance, as this test often varies from day to day and from person to person.

Ketoacidosis is a dangerous condition characterized by high blood sugar, ketone bodies in the blood and urine, and high blood acidity. It is most often caused by diabetes, though infections, alcohol abuse, starvation, salicylate toxicity, or lactation can also cause the condition.

Ketoacidosis develops when insulin is low, either because sugar stores are depleted or (in the case of diabetic ketoacidosis) when insulin cannot be produced in sufficient quantities. These conditions produce a cascade of events that lead to the buildup of ketone bodies and acidification of the blood.

If an emergency nurse identifies the symptoms of ketoacidosis in a patient, they will conduct a number of blood and urine tests to check blood sugar, ketone levels, and blood acidity. If you suspect that you are developing or have developed ketoacidosis, seek medical attention immediately.